Advances in food technology continue to revolutionise all sectors of the food industry around the world. The pandemic has altered consumer habits and existing food systems, and food personalisation that enhances fitness and health is regarded as a top priority. Personalised food options include targeted medicinal benefits, specific dietary requirements and energy boosting snacks and beverages.

Consultancy giant EY has identified key megatrends that will shape the way food companies operate. Jon Copestake. EY Global Consumer Senior Analyst. predicts: ‘The buzzword of 2022 is going to be the metaverse and from an innovative technology perspective, food brands need to change the way they engage with customers.’ Consumers should be able to enjoy their experience of a brand, as well as the product itself.

Impelled by current industry challenges and to overcome labour shortages and reduced profit margins, restaurant chains are introducing new tech solutions. Food delivery robots and drones stand out as a possibly effective way of lowering labour costs and Domino’s has already successfully trialled driverless cars in Miami and Las Vegas. Robotic arms that mimic human movements by stirring, mixing and adjusting cooking temperature are also in circulation, with one Israeli restaurant chain utilising robots to produce 50 pizzas an hour. Front of house robots and waiter-bots are additionally easing the human workload, although one allegedly ran away from customers wearing jewellery and another had to be switched off for talking too much. 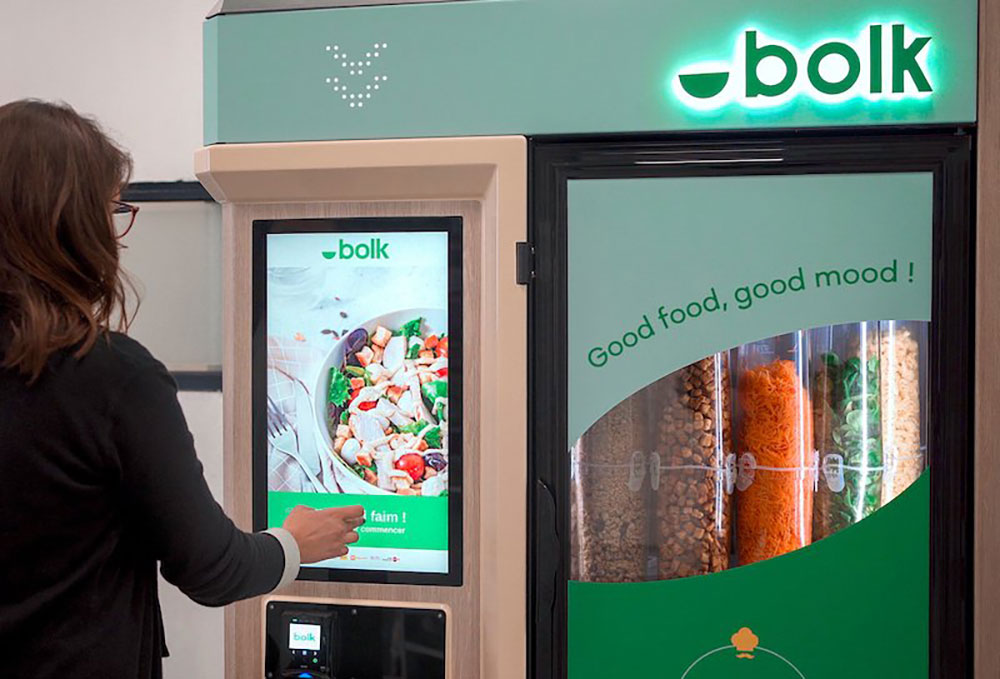 French catering start-up Bolk attracted €4 million from investors when it launched its own robotic automation brand and now aims to produce and deploy 40 robots in various parts of France.  Each Bolk robot takes up less than two square metres of floor space and has the capacity to produce up to 60 meals an hour, with up to 300 different combinations, either served cold or reheated.

The financial fall-out from the pandemic has boosted the emergence of ‘cloud kitchens’, also known as virtual or dark kitchens. As consumers adapt to digital food platforms as the norm, online delivery applications provide improved customer service in a shorter timeframe, as well as potentially reducing traditional running costs. Food hygiene standards are maintained by disposable packaging and an assurance that food will not be spoiled in transit. Cloud kitchen start-up Taster plans to expand its schedule for licensing cloud kitchens rather than building kitchens from scratch. The London based company was founded by Anton Soulier, a former Deliveroo employee, and attracted a massive $37 million investment earlier this year.

There is now a way to make aged-style spirits under 24 hours, proved by ground-breaking American start-up, Endless West, producing a ‘molecular whisky’ called Glyph that tastes like mature whisky without the traditional ageing process in a barrel. Branded as ‘all of the spirit none of the rules’, Endless West intends working with other spirit brands with a view to cutting back on production while boosting sustainability. Co-founder, Alec Lee, explained to Forbes that the make-up of wine is a great example. “A grape grows slowly and requires a huge amount of water and care – and frankly pesticides – often in drought prone regions. Those molecules you ultimately get that turn into the sugars and the flavour molecules are found in other plants that grow faster and grow more sustainably.”

The impact of agricultural systems on climate change is being addressed by Sistema.bio. This forward-thinking Mexican company has created an innovative, affordable biogas system using s hybrid reactor biodigester that converts animal waste into the cleanest of cooking fuels and produces a planet friendly potent fertiliser. Buyers in Latin America, Africa and Asia may no longer need to cook using expensive and polluting wood fuel, or fossil fuels: more than 1.5 million trees have been saved in the process.

In New Delhi, a revolutionary approach to growing high quality, pesticide residue-free Indian staple vegetables for the mass market has been developed by enterprising start-up,  Eeki Foods. A patent-pending plant growth system is behind Eeki’s capacity to grow a wide range of tasty produce, without soil or coco-peat and available all the year round at competitive prices. Enticing varieties of tomato, cucumber, eggplant, bell pepper and spinach are just some of the vegetables grown.

A technology-led approach to the retail future provides the driving force behind the Israeli-based Trigo organisation. Trigo continues to transform supermarket shopping experiences for consumers, bringing contactless, checkout-free shopping technology to several countries. At the 400 square-metre flagship grocery outlet (Aldi Nord) in Utrecht, shoppers can select items before walking out with them, payments and receipts being handled digitally. The same is true in Cologne (REWE), Munich and Central London (Tesco) stores where similar facilities are available. As Trigo builds on its recent partnership with Wakefern Food Corporation, the largest retailers’ cooperative in the US, a growing number of consumers can look forward to the ultimate automated retail experience.