Bfree Foods was founded five years ago and has been a hit amongst consumers in Ireland, the UK, Norway, Australia and most recently the USA. The start-up company was launched in Ireland in 2011 and they embarked on their export mission after reaching sales of €1million.

BFree’s vision was to develop tasty, ‘good for you’ breads that consumers feel they can eat guilt free. None of the products contain gluten, wheat, dairy, egg, nuts or soy and, whilst the taste is often compromised following removal of these critical ingredients from bread products, Bfree has created a formula that ensures the taste remains intact! Fiona Cummins, Brand Manager for Bfree, explained the importance of recipe for their products, “consumers are becoming less willing to sacrifice on taste, flavour and nutrition.”

Gluten free is on the up. In the UK alone, the gluten free market has experienced double digit growth since 2008 and is predicted to be worth £561million in 2017. More impressively, APAC is expected to see in excess of $3billion growth over the next 5 years for gluten-free bread and rolls. Fiona Cummins, Brand Manager for Bfree, predicted that “over the next five years the gluten free market will become more and more mainstream.”

Meanwhile, across the pond, the third most common product claim is gluten-free; 24% of new products launched in America in 2014 bore this claim on their labels, while allergen claims followed in second place with 25% and Kosher was the most frequently used claim at 41%.

The growing market clearly presents an opportunity for BFree to expand and lead the way in gluten-free bread products. Fiona Cummins expects the market to continue to experience growth which will extend to eateries. She told KLBD, “Currently gluten free options are segregated to ‘free-from’ categories in stores and finding options in restaurants and cafes are very limited. Over the next 5 years I think this will gradually move into the mainstream sphere, having more prominent presence in stores and options on menus.” 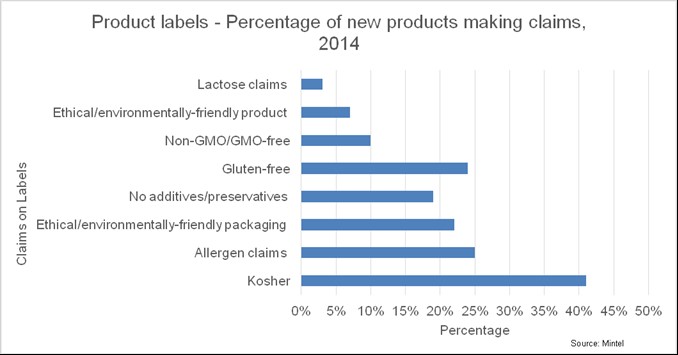 BFree’s gluten-free and kosher status has arguably contributed to their successful launch in America. Fiona confirmed, “Having the Kosher certification has been a great asset to us. It has opened up our consumer base particularly in the U.S. All of our new packaging has the kosher logo on it so it’s easily identifiable as being Kosher friendly.”

To date, BFree has launched on both the East and West Coast, featuring in around 200 Meijer stores and 200 Ralphs Stores respectively.

One of the reasons for their success can be attributed to the slight adaptation of the product to suit the American consumer, involving the removal of all preservatives and added sugar.

Fiona told KLBD, “At the moment our core aim is to expand our distribution in our current markets. We are of course open to new markets of opportunities arise; however our focus is the opportunity is to expand in markets such as the USA which we have recently entered.”

In the coming months Bfree plan to launch into other major retailers in the USA and hope to enjoy similar success to the UK where they secured listings in major supermarkets including Tesco, Asda, Sainsbury’s and Morrisons.